My exciting news is that today I launched my Kickstarter for my sci-fi text adventure Andromeda Acolytes: 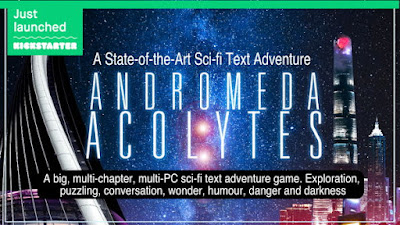 I'm running the Kickstarter campaign for three weeks. I think the resulting game will be a novel and exciting one, bringing longer form character POV to a parser-driven adventure while keeping the sci-fi, puzzling and mystery elements that define the Andromeda games initiated by Marco Innocenti in 2011's Andromeda Awakening.

If this is something you'd like to see realised – or you suspect you'd like to see it realised but perhaps need a bit more seduction via the information-richness of my Kickstarter page – please visit that page. I hope you'll back me! And don't forget to spruik the link to anyone and anything you think might be interested.

In this blog and in Planet-IFfy circles, it's a relief that I don't have to sell the idea of a text game or interactive fiction in the first place. I thought I might instead say something about the first chapter of the game, which I've released as a playable demo:

I had minor nerves that this chapter might not be showy enough for the Kickstarter. The early chapters introduce different PCs, one per chapter, and in each case the chapter begins during what is a normal day in the life of that PC on the planet Monarch. If you're familiar with the scale of recent parser games, you might already note that it's not usual for a parser game to introduce PCs at such length.

Also, I'd say the first PC, Korhva, is the least demonstrative and most reserved of the cast. This makes her a little more challenging to write, and maybe harder to get a handle on.

Nevertheless, the first chapter is the starting place for the story, so I never really considered using anything else. It's also technically strong. I started this work in 2019, so the first chapter's had more testing than any other.

If you back the game or spread the word or help me in any way, I offer you my sincerest thanks.