It was Jean Baudrillard who postulated that we'd all end up speaking in ironic quotes in the hyperreality he also postulated. I think he also coined the phrase 'hyperirony', but Google isn't confirming that point right now, and the ace essay I wrote about this during my degree is both twenty years old and not located in the house in which I'm typing this post on an iPad+bluetooth keyboard combo.

I'm weary in life of being spoken to in ironic quotes I don't understand, but of course when I do it to others (minus the 'not understanding' part) I expect I'm doing it well. I choose source material judiciously, not from obscure hipster cartoons screening on pay TV in another country, for instance.

Often I choose to quote The Simpsons, as they have covered almost everything, and usually done it better and funnier than others. So, my general XMAS message is:

PS I am irreligious.

In Inform-dom, we have been gifted a new version of Inform. It's 6M62:

I like these letters, 6M62. They look bold and ground-touching. Not like my least favourite letters of late, '6L02', who looked veritably frail and consumptive.

In my own Inform-dom, I am well advanced in progress on my CYOA extension. There's still lots to do, though. More coding, making examples, some testing. But the work goes on. This is no vaporware.

Occasionally I speculate on the 'you need an interpreter' paradigm of most parser-based games that grew out of the modern community. Sometimes it feels like it just shifted the obligation to update software so that it keeps working from one group of people to another. That's a simplistic summation, but in the current situation, I don't think I ever worked out if anyone has a particular idea about where the emphases of compatibility should be. The core idea that the games are just words and that users should be able to control the appearance of the words is a good one, except for the million exceptions including graphics, sounds, and various UIs that authors want to use. And being an author and not being able to control stuff can be maddening. So even when the onus is left on the interpreter to be kept up to date (and not your game), from an author's perspective, you may end up with multiple versions of your game where one thing is broken in each one depending on where/how the user plays it, or where it never looks the way you'd really like it to.

That sounds a bit dispiriting, an effect enhanced by me writing it in a dispiriting fashion. But it's not like this is a new situation. Plus, this is XMAS! So get confident, stupid! The reason I vexed on these points a little here is as a prelude to pointing out how I'm going in almost the opposite direction of my traditional design impulses (which are author-biased and pro specificsim) in my choice-based extension. It harkens back to the 'the game is just the words' idea. The author links the word(s) to a choice or, uh, link, but the player can receive these any way they want. If you (THE PLAYER) want hyperlinks for your touch device or for clicking on with a mouse, you can have them. If you want letters of keys you could press, you can have them. You can also have both. So the approach is intended as a bit fire-and-forget for the author. Stop programming interfaces and just put your content in, and expect it to work on desktops, mobiles and in screen readers.

Now, one of the eternal vetters of ideas at intfiction.org, Peter Piers, said 'What if the author wants to override something? eg block hyperlinks, or keypresses, or whatever.' Certainly it remains that there are ways to do this, but as work on this extension has continued, I've realised which basket it's throwing its eggs into more forcefully, and that is the 'let the player control the interface' basket. The controls are simple and plugged into the game by the extension, so it's an extremely far cry from having to hack Gargoyle's template to force it to print in your particular favoured shade of ectoplasm green :(

So! This extension has a design emphasis about how it's going to do things. I think it's a good one for this project.
Posted by Wade at 00:14 5 comments:

Email ThisBlogThis!Share to TwitterShare to FacebookShare to Pinterest
Labels: cyoa framework for glulx, I7 extensions, opinion

Marco Innocenti has just released ANDROMEDA 1983, an 80s'n'8-bit-styled fun-emphasising remake of his first Andromeda game, Andromeda Awakening from IFComp 2011. It's as if Andromeda Awakening had been released in 1983 for the Commodore 64, Apple II and ZX Spectrum as an adventure game with graphics and music. I produced the looping SID chippy soundtrack for the game. 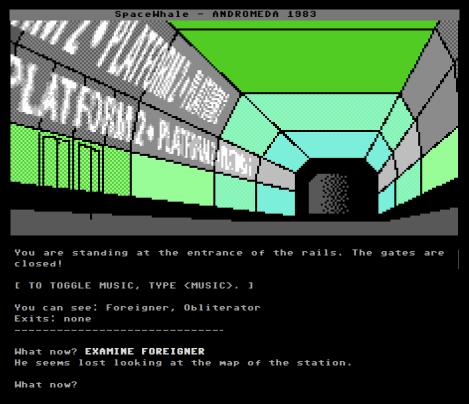 "DISCLAIMER: this is not REALLY intended as a REAL GAME. It's 50% a joke and 50% nostalgia. You, Constant Readers, will tell me where do you fall. It's pretty short, it won't kill your time too much...

PS: Don't expect anything easy or polite to the player. What's actually there, trying and helping the player, was made by the Inform people and it's still there because it was too much struggle to remove. Honestly, it is a feeling I wanted to replicate, and that feeling had no synonyms, most of the time."

As a fan of the original game, I got an extra kick out of 1983, but play-wise it can stand on its own. It obviously wasn't worth trying to reproduce all the complexities of the original game in this format, so it's become a new, simpler game using some of the same basic story, locations and ingredients.

As a grizzled Apple II and Commodore 64 veteran, what really bowled me over when Marco first showed me this were the graphics. It's a very specific aesthetic he's recreated incorporating both the colour palette of the Commodore 64 and some of the pixel-dithering tricks used to produce textures on the considerably less colourful Apple II screen – as if the game's creators had indeed tried to port the game's graphics as consistently as they could across these different 8-bit machines.

After much file-wrangling by the Inform extensions file-wrangler, Mark Musante, for which I am grateful, two new versions of extensions of mine have debuted in the Inform 7 public library this week. They are Menus version 4 and Basic Help Menu version 3.

As previously advertised, my Menus is a significant update of Emily Short's old/classic Menus with a lot of additional features which make it more modern and flexible. I consider the most important of these to be:


These features alone make a menu system powered by this extension far more accessible to anyone playing on a mobile device or using a screen reader. In this light, I strongly recommend that folks wanting to add menus to any new Inform 6L38 project build it with my Menus extension rather than the old Menus.

By the way, I should point out I'm not obliviously shaving skin off Emily Short's nose. I discussed the state of the menus extensions with both her and Inform code maestro Dannii Willis, and we've all been looking at ways forward. My Menus extension doesn't have exactly the same API (Application-Programming Interface) as Emily's, so it's for the sake of compatibility with old projects that the old Menus remains in the public library rather than being replaced by mine. Also, Dannii has plans to revamp Emily's extension in such a way that it will have some of the features of mine but will also retain Emily's API for backwards compatibility. If that comes about, that may be the extension which replaces Emily's in the library.

Basically, my extension is ready to go now, addresses some accessibility issues, has some cool and powerful extra features and has already been through three iterations of polishing and bug-removal.

If you're wondering why I changed the API in my extension, I had to to support some more of its advanced features, like the book mode with automatic pagination.

This extension is the equivalent of Emily's old Basic Help Menu, just recoded for compatibility with my own Menus and with the help information updated to reflect the times in which we live. It adds a Basic Help Menu to your project which contains some how-to-play parser IF info.
Posted by Wade at 15:49 No comments: