"Eamon is a classic interactive fiction game with RPG elements, written for the Apple 2 in 1980. Eamon Remastered is a remake of the classic game for the modern web. Play Eamon adventures in your browser without needing an emulator." 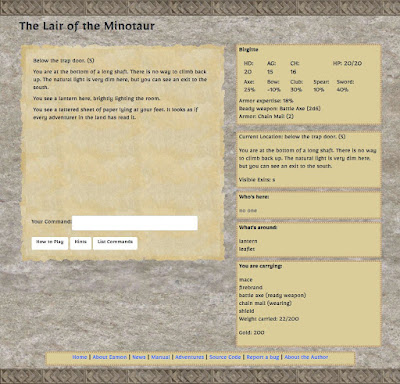 I’ve tried Eamon Remastered, and it’s very good, graceful work, though still with a few light bugs and features to come that are being tweaked out. Eamon Remastered provides a mechanically faithful port of Eamon’s Main Hall, the place where you make your characters, plus a collection of classic Eamon adventures you can try in any order you choose. Characters are stored locally on your computer, so all you need to play is a web browser. There are twenty adventures on the site so far. The starting selection appears to be a curated one, a mix of the historically famous (in Eamon circles), the good, and the reasonable/sensible. I mean reasonable in the sense that the player won’t be killed in such adventures, instantly and repeatedly, by deathtraps and supermonsters. The 250+ adventures made for Eamon during its heyday vary massively in their difficulty level, quality and setting because they were all written by different people, and weren’t subject to any oversight or master plan. Keith’s choice of adventures to port to Eamon Remastered so far looks to spare random visitors from the threat of wack difficulty, and also from the conundrum of having too many adventures to choose from.

(If you’d like to read more about the harsh nature of the challenge presented by some old school Eamons, see my reviews of The Tomb of Y’Golonac and The Pyramind of Anharos on IFDB.)

Keith’s work builds on an MS-DOS port of Eamon called Eamon Deluxe, by Frank Black, a previous (and indefinitely ongoing? Or is it now definitely not-going?) project that had one of the same aims as Eamon Remastered: to make Eamon more easily playable by more people. Eamon Deluxe sought to achieve this via the ubiquity of the DosBOX emulator and by enhancing screen reader compatibility, but when I recently retried Eamon Deluxe on a High Sierra Mac, it was a bit tetchy.

Eamon’s history has enough spread and divergence that it’s as fascinating a one to wander as that of its more cerebral antecedent, Crowther and Woods’s Adventure. You can follow Jason Dyer’s exhaustive attempts to catalogue differences across early versions of Adventure over in his Renga in Blue blog. Eamon was born in a similarly accessible/hackable programming environment, and so from it grew a tree of numerous cousins, offshoots and ports, some with minor tweaks, some with major. Some of them were to other systems and some to languages other than English. Just over the past few years, more thought-to-be-lost adventures on old floppies have turned up and been added to the general library, or to the PC Eamon Museum.

Matt Clark’s intermittently updated blog The Eamon Adventurers Guild tracks all of these finds and updates. It's a good read if you want to see what Eamon stuff has been going on between 2004 and the present. A couple of my favourite posts include the tour of the historical promo disk for an envisioned (read: now vaporware) Apple IIGS-specific version of Eamon and the review of a sneaky commercial version of Eamon called Load’N’Go Beginners Cave.

A ton of heavy Eamon lifting was done post-heyday by Frank Black with Eamon Deluxe. As I understand it, another of its goals was an exhaustive one: to eventually port every Eamon adventure to Eamon Deluxe. It seems unlikely that will ever happen, but Eamon Deluxe already sports a solid catalogue of adventures, including some original ones for the system. It also contains a reorganised Eamon adventure tree with vacant branches in it ready to receive the yet-to-be-ported games. I was chuffed to see there’s even a slot in there for my game Leadlight.

Another neat feature of Eamon Deluxe is that it holds reviews for many of the adventures in the app itself. That’s to say that you can read them from the same interface in which you browse the adventures. This approach gives Eamon Deluxe the potential to be the Ultimate All-In-One Eamon Box, though I think it will remain a potential.

To read more about the earliest days of Eamon (from a recent perspective) you can also check out Jimmy Maher’s posts about it in The Digital Antiquarian.
Posted by Wade at 18:26 No comments: