In Sarah Willson's parser game Closure, teenaged Kira has snuck into the dorm room of her newly ex-boyfriend TJ (using her spare key) intent on nabbing a particular photo of the couple for future reminiscence purposes. As she commits this rummaging crime of the century, she texts her best friend, YOU, THE PLAYER, detailing her every move and asking what she should do next at each juncture. The result is a charming game of rummagey revelations, presented in one's browser with an excellent marriage of content and aesthetic framing, and which took me twenty-three minutes to complete. 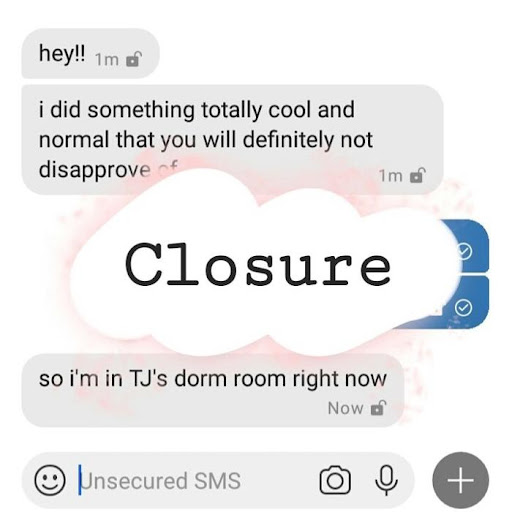 I think it would be easy to oversell the game's presentation as the answer to the question of why it works. When Closure is played in a web browser, it certainly puts the player in the right frame of mind to see the speech-bubbled messages appear onscreen as messages do, but what's considerably more important is the dynamic flow of the prose and its accuracy as (pretty articulate, considering the situation!) text message writing. The divisions between successive messages indirectly convey the flow of thoughts in Kira's mind, and also lead the player to visualise the physical actions Kira might be taking between texts. The game can't mention all of her lurching about, lifting and dropping things, her gaze alighting frantically on this and that, her occasional standing back to consider the situation, these things that she must be doing, but I experienced them in a peculiarly vivid way for their absence.

I was actually playing Closure offline initially (I play almost any game offline if given the chance) and even in that situation where the messages didn't appear in bubbles, I already appreciated how well the game was presenting as a text messaging simulation. Prior to IFComp, I had read and responded to some of the author's presentation queries on intfiction.org. It was only via the ABOUT command, which mentioned something like "CSS magic", that I realised perhaps the author had found a solution that was browser-based, and which caused me to check out what she had done with the game online. So I can confirm that Closure works just as well without any CSS assistance.

The game is well-implemented in terms of cleverly fobbing off many typical parser actions in context, or translating them into the game's context in cute ways. For instance:

i'm using that picture from new year's as your contact photo!! hahaha

Mechanically, it is a one-room game in which you need to search everything in the room to reconstruct the backstory as to why TJ broke up with Kira. This isn't a particularly difficult task, but the revelations are laid out well, with Kira realising things about both TJ and herself in the process and the player being compelled to keep digging.

The next paragraph is 100% spoiler:

From what's learned, it's clear neither character is a titan of complexity (au contraire), nor was their situation. This all suits a still-in-high-school relationship. From being on the outside of Kira's experience, I moved into it a bit, and could think things like, "Yeah, you should have tried to understand TJ's extensive sneaker collection a bit more if you really wanted this relationship, not just made fun of his extensive sneaker collection." Outwardly, this sounds superficial, but I can buy it. People have broken up over infinitely dumber things. I also don't know the nature/extent of the sneaker-teasing; maybe it wasn't actually so dumb an interaction in reality. Also, it wasn't only the sneaker-teasing; there's the liking-metal-music teasing. The conceit is that Kira is texting in harried fashion as she snoops a dorm room, so I can also accept the lack of details regarding these events within the context of the game. Can the game stand up without such details? I've argued here that it can, except that the final revelation of TJ's having run off to marry someone else felt weird and extreme. It's clearly not an impossibility, but it didn't feel like the right end for this game to me.

I think Closure presents its situation as a game about as well as anyone has ever presented this kind of thing in IF. The texting conceit, the thoughts of the responding character as modified by this mode, the prose used to convey it, the dynamics of the text itself and the thoughtfulness of how Kira responds to conventional parser instructions are all handled wonderfully. The only misstep for me was the final revelation.