IFComp 2021 review: AardVarK Versus the Hype by Truthcraze

(Update: On November 5 2021, author Truthcraze reworked and extended the ending of the game. You can read about that in his intfiction.org post at this link)

Disclosure 1: I was supposed to help beta test this game. Due to a bunch of bad timing of availability and communication, I didn't. Therefore, when and if I see any bugs in it that I could have staved off, I feel I can only flagellate myself.

Disclosure 2: The author, Truthcraze, had sneakily let it slip in advance (i.e. he told me directly) that this game was likely to appeal to fans of the film The Faculty (1998) amongst other things, and I am a fan of that film.

This game did appeal to me, and continues to do so. It took me 63 minutes and 29.4 seconds to complete. 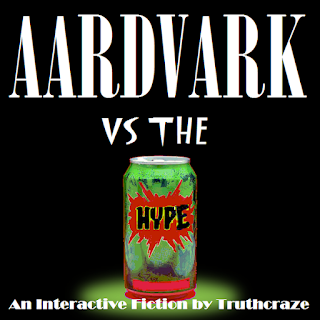 AardVarK Versus the Hype (AVH) is an extremely funny parser adventure about a bunch of teens whose rock band, AardVarK, suddenly becomes very important for the project of life's continuance when a corporate/alien entity known as Hype starts flogging its soft drinks ("sodas" for the handful of Americans out there) to innocent high-schoolers. The brew's side-effects include mindless shillism and bleeding from the orifices.

The game is set in 1997, a time when popular culture was still dominated by the recent explosion of alternative music into it but before the internet had made any excursion onto the same turf; the game is blissfully free of the internet. If I was going to hazard a cultural thought of the kind I don't know that Truthcraze would approve of in the case of AVH, I'd suggest the simplicity of The Kids versus The Hype conflict is already a bit nostalgic for the eighties, a time when individuals-sticking-it-to-commercial-behemoths plots were easier to articulate. The film Reality Bites (1994) captured the zeitgeist of young Americans of the 1990s trying to retain their cred in a culture that was beginning to facilitate the commodification of everything.

Such drama is not what AVH is about. It's about the eternal comedic struggles of being a teenager (well, eternal since the 1940s or so, so not very eternal at all, actually) and about the nineties version of them in particular. The player gets to control all four members of the band AardVarK at different times with a SWITCH TO (PERSON) command. The switching isn't bound up with complex puzzles. It's essentially for narrative purposes. These teens are boys and girls, punks, goths, would-be frontpeople, singers and guitarists. The nineties wack is clearest in their dialogue stylings. There is a ton of multi-option dialogue in AVH wracked with a mixture of self-consciousness and excitement as the teens try to blurt out their explanations of weird shenanigans and corporate shills.

It's not so much what the characters want to say to each other that changes across options, only how they're going to say it. Bravado, hostility, coolness, honest dorkiness and cluelessness are some of the modes the player can choose amongst. Just reading all the different options, including the 75% not chosen, makes for a good chunk of the comedy. There's rarely any revisiting of unpicked dialogue paths because the story and conversations are too busy screaming forward for that.

The seat of the game is a wonderful repeating set piece joke involving the Gas'n'Stop convenience store, a location that has been thoroughly plundered and destroyed by the time all the main PCs have abused it. There are also jock-guarded parties, night-time trees to be climbed, cars that are rocking, and condom-purchasing jokes executed in good taste. Furthermore, AVH has some cool tricks of delivery up its sleeve. One is the way it will suddenly override the player's typed commands with replacement evil ones if the current PC gets possessed by The Hype. Another occurs in a situation where the PC's car turns over, at which point some of the printed text does the same thing. I don't remember seeing that joke in a parser game before.

AVH is a game that wants to help you finish it. It has graded HINTs you can ask for, but it's constantly prompting for free anyway in an amusingly harried voice. I think part of this stems from the fact that it's trying (successfully) to create a sense of lively action, and having players stand around examining everything is anti-action. The game would rather remind you of the next thing you're meant to be doing than let you gawp. There's also a decent amount of fourth-wall-breaking, and its version of the parser voice versus character voice dance is a cute one. I hit some bugginess across the game (remember paragraph one: I am now hitting myself with a stick) but the only thing that actually tripped me up was a guess-the-verb moment which was cleared up by the HINTs.

I admit I'd have liked some more reinforcement of differentiation amongst the teens identities across the game, what with all the SWITCHing amongst them that goes on, and the victory scene felt rushed (Update: On November 5 2021, author Truthcraze reworked and extended the ending of the game. You can read about that in his intfiction.org post at this link) but these aren't major complaints for a story this funny and engaging. I laughed aloud a lot, admired the many forms of comedy wielded by the writing and loved the Gas'n'Stop situation.