I always start an IFComp season with a horror game, since horror is my home turf, mentally, spiritually, fan-wise and way-of-life-wise. This year I chose to go with the parser game Dr Horror's House of Terror (DHHoT) by the redoutable Ade McT.

(Link to ballot page with links to game: You might need to be registered with IFComp to see it? Search for 'house of terror' at https://ifcomp.org/ballot)

I didn't finish DHHoT in two hours and, as far as I can tell, I was a long way from finishing. This outcome alarmed me, as I'm one of those people who seeks to avoid really long games in IFComp (re: the rules; you must lock your vote at the two hours of play mark.). I was given fair warning: the game is labelled "Longer than two hours". However, with my horror chutzpah I'd thought, "I bet that time label overestimates the duration and underestimates my great skill levels." I did not find the label to be an overestimation. I did not find my skill levels to be great, but they were sufficient. 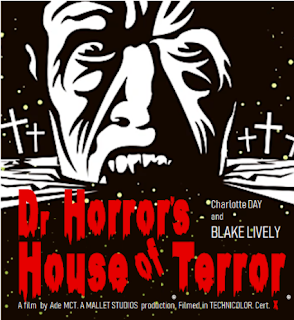 In this comedic horror adventure with a surfeit of exclamation marks, you play an actor of questionable skill appearing in the new vampire flick for Mallet Studios. After incensing the film's director, you find yourself embroiled in supernatural life-or-death shenanigans all over the studio backlot. The game is lively with dialogue and NPC action, solid with mostly mechanical puzzles, and has a deft light touch over an underscore of the uncanny that grows out of its highly varied studio settings. Implementation is very good but not great (there are a lot of omissions of inconvenience, and I feel more actions could have been implemented) and I didn't totally understand the mixed-up time aesthetic as a choice. Overall, an engaging long form puzzler with some extra juice for folks who appreciate the films referenced and the luvvie world. The playtime is three hours plus, and how much plus I don't know yet.

Geographically, this game can be viewed as a series of hubs. Most of the hubs are sets for different horror films. These sets riff on the production styles of both the 1930s/1940s Universal horror films and 1960s/1970s British Hammer films, and on the classic monsters that appeared in both studios' films. The hubs have self-contained puzzles as well as elements that help you solve puzzles elsewhere. So even though the map isn't huge, this style of puzzle construction takes a lot of work to tackle. The environment quickly goes from being gated to semi-gated to open, meaning you may have to explore everything in the open area before you can work out what puzzles there are and what tools might help solve them all. I should point out there's a hint file with the game that I didn't use. I felt the difficulty was about right for me and that I'd be more satisfied going without.

The surface tone of DHHoT is initially light, and the humour is very perceptive of the world of dry-witted British luvvies, all these actors constantly caught up in the preciousness of their work and the gossipy connections of thespian life. This lightness becomes darkly funny as the game pushes you into a confused reality, the adjacent film sets and their different worlds being quite disorienting. The monsters may be real and the actors may not be acting, but even as the latter realise this they're still speculating on how life's going back at the Old A, or the prospects of the chap who went to Brazil to appear in "If you like it, Missus".

When there is gore, it has a slapstick silliness about it that fits the overall lightness. The creepiness of the game is in the reality gulf depicted in its cloistered studio world. Your actor pals are largely oblivious to the nature of the weird, trapped life they're leading, and your'e the only one who notices the grisliness of some of the studio props (or not-props). Still, your PC takes goings-on at least half in their stride, and they have to, narration-wise, or the game would be entirely bogged down in reactions to every strange occurrence. It's solid with prose already for a game of this pitch.

At first I assumed DHHoT was set in the 1960s or 1970s, based on the kind of typical-for-Hammer vampire film Mallet are making in the opening scene. But then I came across a keypad-locked door and security cameras. After that, I encountered the elaborate set for a werewolf film which definitely seemed to be a version of Universal's famous backlot from the 1940s, and not something Hammer could or would have done in the 1970s. The game also distracted me every time it mentioned the name of the character Blake Lively, a contemporary female actor in reality but a male Laurence Olivier-type playing a vampire in this game. It may be that the author christened him thus primarily for the sake of the joke of having Blake Lively's name on the cover of the game, and I have a sneaky admiration for that kind of commitment.

I ended up concluding that DHHoT is set in no particular real time. Its reality is constructed out of anachronistic ideas related by theme that the author wanted to put into this world. I actually wish it was set in a particular time and place, because that would have made its specific references resonate more strongly with me. People who don't know this turf as well as I do, and those who've grown up in the postmodern maelstrom of the 2000s, will probably not notice or care about this.

After a few hours, I had cleared one-and-a-half hubs and explored another two. There were hubs I hadn't even entered yet. So that speaks to the ultimate volume of this game.