IFComp 2020 review: For a Place by the Putrid Sea by Arno von Borries

For a Place by the Putrid Sea (PS from now on) is a parser game sequel to Arno von Borries's remarkable and demanding 2015 IFComp debut parser game Gotomomi. No knowledge of the former is necessary to play, but my memories of it did help me tune back in to its gameplay style and aesthetic, which extend into the latter. Gotomomi's PC was a teenaged girl who was sharp with both street smarts and intellect. Her goal was to scrounge up the money to buy a train ticket out of the seedy Gotomomi docklands area of Tokyo. In PS, she returns a few years later, fleeing some unspecified shadiness in Manila and looking for a place to live. 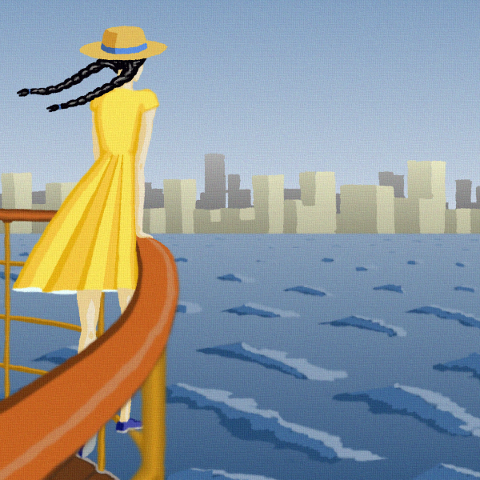 Gotomomi was a large, quite open and difficult game of great mechanical and cultural detail. It offered many monetary paths through its world (e.g. the ability to take on and complete different jobs and to haggle over prices) and a lot of optional experiential content. Some sequences were implemented with microscopic granularity, for instance the (in)famous timing-critical fish-bucket-carrying challenge, which I described as a kind of Tetris and which marked the point at which I stopped playing due to feeling overwhelmed in general. The game was a very impressive construction, but fans and onlookers alike admitted it was not the kind of project to clean up in the context of IFComp.

The arrival of this sequel suggests to me that Borries likes the original game, wants to revisit its world and reinforce it, and maybe address some of the criticisms levelled at the original.

I travelled better and further in PS than I did in Gotomomi, but again, I didn't make it to the end. PS is definitely a more player-focusing game than its predecessor. The geography is tightly gated so it shouldn't take the average player long to acquire a clear goal or two, and the catchment area for exploration and solutions is more localised. The heroine Ayako again finds herself dealing with a range of shady and eccentric residents of Gotomomi – amongst them a very non-community-minded landlord and that guy who runs the fish factory – as she seeks sources of money and behaves quixotically.

Minor spoilers beyond this point.

Ayako's personality is still opaque. While TALKing to other characters is important, the PC's binary response options tend to fall into either the practical or callously indifferent baskets. Or both, with black humour, in the case of a corpse that needs to be disposed of. Ayako certainly doesn't express much directly to the player.

Having played all of Borries's games except Abbess Otilia's Life and Death, I've a sense by now that this non-committal approach is part of his aesthetic. The gameworlds don't seem to express direct judgments on proceedings, giving them an open feel that also allows in a wide range of life content, from the best to the worst, without any histrionics. I can point to the mechanical grizzliness of trench warfare simulator Dead Man's Hill or the swampy morality of the young explored in Rite of Passage (which I helped test). Even PS's title mixes the poetic, the ironic and the sordid, suggesting the game will traffic in all of these areas.

Still, I came away from PS feeling like this relatively bizarre woman I'd been playing was a kind of facade, even though I seemed to know a collection of specific details about her. She hadn't become less mysterious based on choices I'd made. Nevertheless, she does reflect the capricious world she's in, and so perhaps she is exactly what she needs to be.

There is an especially great joke in PS where it threatens to revisit the fish bucket challenge from the first game, verbatim, and the heroine protests:

"You're in luck. I think the girls could use some help with the current delivery."

[1] "Please don't tell me it involves carrying buckets of dead fish from one room to another."

"No, no, nothing like that. You see, the factory was modernised last year and is now fully automatised. No more manual gutting, tinning or hauling. It's all done by machines now, on the conveyor belt.

My own response was some kind of hysterically relieved nervous inner laughter. Instead, the player gets an infinitely easier version of the fish bucket scene, followed by a coda with an entertaining new puzzle that involves evading a cranky roving mechanic in order to steal some sticky tape. The mobile NPCs and dynamic character behaviour in general, driven by the passage of time (turns) make the world feel alive. Details like the author's attentiveness to Japanese clothing, domestic arrangements and the microscopically-implemented, jeton-fuelled washing machine make it feel real.

I found I was having trouble with PS at around 70 minutes of play. I had turned to the walkthrough a couple of times by that point, falling to a slight feeling of aimlessness. I don't like to persist with a walkthrough when I don't know why I'm doing what it's telling me to do, and I had to do some backwards exploration of the game to inform myself. Having caught up, I sensed I still hadn't reached the halfway point of the game, and I was starting to experience some querulousness to do with boats, swimming and getting undressed (or being unable to) that made me wonder if I'd missed something or had encountered a bug. Due to RSI, my stamina in these situations isn't what it used to be and I decided to move on.

I certainly enjoyed what I played of PS, and was surprised at how many memories it stirred of a game I didn't even complete five years ago. It stands alone as a remarkable creation but is also a discrete iteration of Gotomomi with notable help additions like a contextual hint command and bolded exits. At other times, I can see how it isn't helpful with its neutral outlook. The other characters rarely evolve their understanding of a particular situation to the extent that they'd comment on it and thus give the player feedback, no matter how close to the target the player has come. Examples that come to mind include Vanya, the boatman, or the trading lady who can keep obliviously and randomly offering the same items for trade when it turns out only one will do. I guess that's what I'd expect from an old Infocom game, but my tolerance is down these days. Yet again, in context, this approach fits in with the low-key wariness that permeates the gameworld.

Gotomomi was hard, and I think PS is, on the whole, also hard, but considerably less hard. Its increased focus probably means more of it will stay with me, too. Like its predecessor, it generates a feeling that reaches beyond the sum of the parts. It may turn out PS is better played at a more leisurely pace outside of IFComp. That is where I expect I will revisit it later.