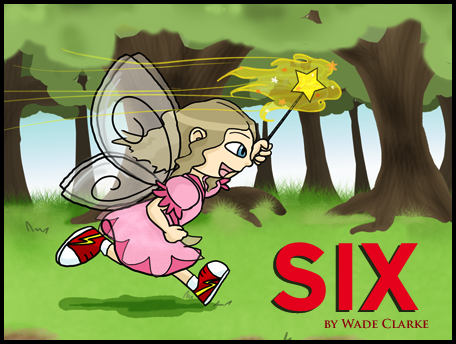 Did you know that Six, a game suitable for all ages about children playing hide and seek at a birthday party, came second in its year and won the Best Implementation award at the 2011 XYZZYs? It behooves me to remind you of these things. You can visit the slightly refurbished Six website and/or the game's IFDB page for info, propaganda and downloads.

Now I'll tell you what's changed in version five of Six. Summarily, the game content itself hasn't changed, so if that's all you care about, you can stop reading.

I made version five primarily so that I could remove any 2011-centric tech talk from the game's configuration stage. It's now got a more general outlook that means it can sail gracefully into the future, no longer telling people to do or not do things that may only have been correct in 2011. (Those things were important at the time. I was trying to get people to play the game in a fashion ideal to me during the Interactive Fiction Competition.)

If you ever pine to be pushed around like it's 2011, don't worry, the IF Archive will always carry the original version of the game. Better yet, now that the archive can store multiple past versions of games, you could just retreat slightly to version four, thereby benefiting from all the bugfixes and improvements that had occurred since version one while still experiencing the 'classic' configuration stage of 2011!

To accompany the config stage changes, I've tweaked pages four and five of the PDF game manual to match. Page four of the manual now has a hyperlink to the Six website – a site I will try to never, ever move – where I can maintain a simple-as-I-can-make-it interpreter download grid. It's a kind of triage: Just read through the three options until you find one that matches your OS and feature concerns. This aspect of playing parser games has not gotten any easier. This is why such a page is helpful.

The default volume setting in Six is now 3 out of 5 (for both music and FX) instead of 5 out of 5.

Summarising why I made this change from under my music producer's hat: Some players have reported that they experienced the soundtrack as being louder than they expected it to be. Such a judgement only exists in relation to how loud they perceive other sounds they're familiar with to be at the same volume dial position.

Part of Six's loudness is down to the soundtrack having few elements in it. As an example: In the world of recording, a single violin playing can easily be perceived as louder than the whole of Metallica playing, at one volume dial position, if the violin and Metallica were both recorded to peak at digital zero (beyond which only distortion is recorded) and delivered that way to listeners. Six peaks at digital zero, and though it wasn't made with an explicit goal of loudness, its few synths are filling the same volume bandwidth as, say, a pop or rock artist's whole band.

The second issue is that, given the nature of the game and the cute-leaning music, people just expect this kind of music to not emerge too loudly. We don't blast children with loud music (do we?!).

So I'm using Inform's volume amplification stage to moderate the default volume of Six to a lower level. You can still turn it up and down inside of your IF interpreter within the same range as before. The upshot is that for someone playing for the first time, the music won't debut as loudly as it used to.
Posted by Wade at 16:37